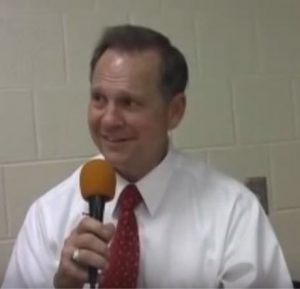 Roy Moore Sexual Abuse — another inveterate enemy of state-church separation has been accused of sexual abuse.

In an explosive article, the Washington Post details the story of four women who accuse Roy Moore of having inappropriate sexual conduct with them while they were in their teens and he was in his 30s. Moore is currently a candidate for the U.S. Senate seat from Alabama that Jeff Sessions vacated to be attorney general.

Moore is the disgraced former judge who was dismissed from his position on the Alabama Supreme Court for refusing to comply with and uphold the Constitution — twice. FFRF has long fought with Moore, even before he placed, and refused to remove, a two-ton granite Ten Commandments in the Alabama Supreme Court building. FFRF’s Alabama chapter, the Alabama Freethought Association, sued Moore in 1995. Moore was a county judge in Gadsden, and he forced jurors to pray and displayed his handcrafted wooden Ten Commandments plaque above his bench.

The Post article details sexual misconduct that took place from 1979 through 1981. The stories of the four women share some similarities: an older man plying teenagers with alcohol, taking the girls on “dates,” and even using the prestige of his office to cultivate the relationships.

Moore’s infamy is tied to his willingness to abuse his public office to promote his personal religion. His primary loyalty as a judge was not to the law and the Constitution, but to his bible. The women’s stories reiterate Moore’s shocking disregard for public service and public office. He used his position as a district attorney to gain the trust of Nancy Wells, mother to then 14-year-old Leigh Corfman. Waiting outside a courtroom on a wooden bench, Moore approached the mother and daughter according to their retelling. Moore, whose office was down the hall, explained to the mother that she didn’t want her daughter to go into a child custody hearing, and that he, a district attorney, would watch the child. Then:

Alone with Corfman, Moore chatted with her and asked for her phone number, she says. Days later, she says, he picked her up around the corner from her house in Gadsden, drove her about 30 minutes to his home in the woods, told her how pretty she was and kissed her. On a second visit, she says, he took off her shirt and pants and removed his clothes. He touched her over her bra and underpants, she says, and guided her hand to touch him over his underwear.

Moore also used his office to get near and select another victim, Debbie Wesson Gibson, who was 17 when Moore spoke to her high school civics class.

Moore has denied the allegations the four women are making independently of one another.

Moore’s public displays of piety will no doubt be called hypocritical, but while he is certainly a monster in many respects, Moore’s alleged sexual assaults didn’t violate any of his cherished commandments. There is no prohibition of rape or child molestation in the Ten Commandments. Neither even rates mention in the supposedly highest moral law Judeo-Christianity has to offer. There is no consent requirement for sex. Even in the rest of the bible, rape is not treated as a crime against a woman, but as a crime against the man who owns the woman.

As sex scandals continue to rock churches, Hollywood, and politics, it seems that the old rule of thumb holds true: The more publicly pious an individual is, the more likely they are to be involved in a sex scandal. Ted Haggard, Dennis Hastert, Josh Duggar, Larry Craig, and the Catholic Church are but a few examples. Roy Moore is the newest addition to this list. 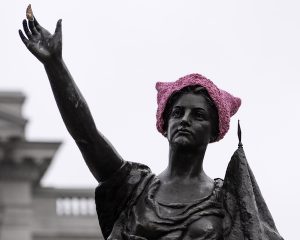 The Johnson Amendment is under fire by a very few!  Please show your support for an amendment to the House’s tax reform bill that will keep dark religious dollars out of politics.

Among the promises made by Donald Trump during the campaign was repeal of the “Johnson Amendment,” the tax law provision that prohibits 501(c)(3) charities —

including churches — from supporting or opposing candidates for office. The congressional tax bill is delivering that promise by weakening the amendment and opening church doors to partisan shenanigans.

Georgia Rep. John Lewis is proposing an amendment to the House bill, scratching the provision that would eviscerate the Johnson Amendment. Please contact the House Ways and Means Committee and urge it to support this amendment.

(Keep reading for more information about the Johnson Amendment and the effort to repeal it.)

As part of their public trust, 501(c)(3)s file financial information with the IRS and every penny donated and spent is tracked by the government. But churches file nothing, and without the Johnson Amendment, any mega-donor could write a check to the nearest church for any amount, earmark the donation for a political campaign and take the tax write-off. Meanwhile, the church can then spend the donation on anything, including politicking. Essentially, churches would become unregulated, unaccountable super-PACs. We might even see PACs reorganizing as churches to compete for donors who would now give their donation, now tax-deductible, to churches.

During his proposal to save the Johnson Amendment, Rep. Lewis described his reaction to the effort to destroy the amendment:

“It never crossed my mind that with our notice of warning, this committee would actually consider a bill to repeal the Johnson Amendment,” he said. “It was too crazy, too unbelievable of an idea to be even possible. When I reached the end of the bill, I was shocked and appalled.”

Analysts have noted that permitting a large group of previously nonpartisan organizations to become partisan will bring much more dark money into our elections – and that money will be tax deductible.

There is massive opposition to changing this law.

Since this law came under attack, thousands have spoken out saying how important it was to them. Over 100 spiritual organizations, more than 4,200 individual religious leaders, 5,500 nonprofits (including law-enforcement groups), and nearly 100 members of Congress have signed letters detailing the damaging effects alteration of the law would have on their communities.

Recent polls show strong support for the law. Only a few individuals seeking power are behind challenges to the law, as no denomination supports changes.

These changes to the Johnson Amendment are unacceptable, and must be opposed at every level. Please support Rep. Lewis’ amendment stripping this harmful provision.

Nonbelief Relief, a charitable organization created by the executive board of the Freedom From Religion Foundation, has announced an additional donation for hurricane-besieged Puerto Rico and new funding to aid the Rohingya refugees in Bangladesh. Nonbelief Relief has also extended a $5,000 stipend to a Bangladeshi atheist who is stranded in Nepal with his wife and child after fleeing for his life from his native country in 2015.

Generous donations from nonreligious Americans to Nonbelief Relief in October have made possible the new $10,000 grant to Americares, earmarked for Puerto Rican relief. Additionally, Nonbelief Relief has redirected $2,500, rejected by Boca Helping Hands to aid its work after Hurricane Irma hit Florida, to Atheists of Puerto Rico, for direct aid to Hurricane Maria victims.

“What is happening to the Rohingya is a result of religious persecution,” says Annie Laurie Gaylor, who as FFRF’s co-president acts as administrator of Nonbelief Relief. “There should not be official or de facto national religions. In an ideal world, all governments would be secular, and religion would be an entirely private matter of conscience.”

The grants are in addition to approximately $100,00 in donations given out by Nonbelief Relief earlier this fall to secular charities, many of them providing relief to North American flooding, hurricane or earthquake victims, as well as $10,000 to the nonprofit ConPRmetidos specifically for Puerto Rico.

Nonbelief Relief is aiding a persecuted atheist teacher whose story will appear in the December issue of FFRF’s newspaper, Freethought Today.  He was relocated to Nepal by Forum-Asia and has been helped by several groups, including Amnesty International, but those grants have run out. He is not considered a legal immigrant in Nepal and is trying to relocate to another country with the help of some human rights organizations.

Nonbelief Relief Inc. is a humanitarian agency for atheists, agnostics, freethinkers and their supporters to improve this world, our only world. It seeks to remediate conditions of human suffering and injustice on a global scale, whether the result of natural disasters, human actions or adherence to religious dogma. Such relief is not limited to but includes assistance for individuals targeted for nonbelief, secular activism or blasphemy.