The Freedom From Religion Foundation has filed an amicus brief in the famous case currently before the U.S. Supreme Court about whether a baker can refuse a cake to a gay couple.

Masterpiece Cakeshop Ltd. v. Colorado Civil Rights Commission seeks to radically redefine “religious freedom” as the right to impose one’s religious beliefs on others. Commercial businesses seeking exemptions from anti-discrimination laws are a prime example of this alarming argument. A Colorado baker refused to bake a cake for a gay marriage, contending his rights under the Free Exercise Clause of the First Amendment let his place of public accommodation discriminate against gay customers.

The Supreme Court has historically rejected free exercise challenges to neutral laws that regulate action, especially actions that harm other citizens. Interpreting a free exercise right to be exempted from anti-discrimination laws would have no practical limits, inviting discrimination against all protected classes not only in places of public accommodation, but many other contexts, FFRF asserts. This interpretation would also violate Establishment Clause principles by singling out religiously motivated action for special exemption from civil laws.

“The legitimate powers of government extend to such acts only as are injurious to others,” Thomas Jefferson remarked. “But it does me no injury for my neighbor to say there are twenty gods, or no god. It neither picks my pocket nor breaks my leg.” If one’s religion, however, mandates picking pockets and breaking legs, that conduct comes under the purview of our secular law, FFRF contends. To do as the bakery asks would grant a license to pickpockets and leg-breakers, so long as they themselves believed that license to be divinely inspired.

There is no logical or practical way to draw a line between religiously motivated racial discrimination and racial discrimination motivated by nonreligious beliefs. In the 1960s, Maurice Bessinger, refused to let a minister’s wife enter his South Carolina barbeque joint because she was black. Bob Jones, the televangelist and founder of an eponymous religious school, infamously declared that segregation was scriptural in a 1960 Easter sermon.

The state of Colorado has sought to prevent harm by including sexual orientation as a class protected by law against discrimination in places that sell goods and services to the public. The Free Exercise Clause of the First Amendment does not mean that anyone with a religious objection be permitted to disregard this religiously neutral anti-discrimination law.

Elevating religion and actions based on religious beliefs above the law by granting them exemptions to general and neutrally applicable laws will create chaos and have far-reaching effects, FFRF maintains.

Discrimination against Jews will increase, for instance. If there is a right to refuse service to a protected class because one’s religious belief demands it, Jews may be among the first to feel the sting of this massive redefinition of the law. But they will not be the only ones.

Discrimination against atheists will increase, too. The bakery admits that its owner refuses to design custom cakes that “promote atheism,” along with those that promote “racism, or indecency.” Given that the company regards selling any wedding cake to a gay couple as “promoting gay marriage,” it’s easy to see how a desire not to “promote atheism” might similarly result in a refusal of service based on a customer’s atheism.

“The Free Exercise Clause cannot be interpreted in a way that would undermine the Establishment Clause,” FFRF’s brief states. “A ruling in the bakery’s favor would create an interpretation that prefers, favors and promotes religion over non-religion. Such a decision would undermine long-settled and critically important principles under the First Amendment’s Establishment Clause.”

The U.S. Supreme Court has never held that the Free Exercise Clause requires an exemption from neutral laws regulating conduct. It should decline to do so now and uphold the decision of the Colorado Court of Appeals, FFRF argues to the Supreme Court in its brief.

FFRF’s interest in this case arises from the fact that most of its members are atheists or nonbelievers, as are the members of the public it serves as a state/church watchdog. The Freedom From Religion Foundation, a national nonprofit organization based in Madison, Wis., is the largest association of freethinkers in the United States, representing more than 29,000 atheists and agnostics, 10 percent of whom identify as LGBTQ. A ruling that state and local governments must tolerate religiously motivated discrimination in places of public accommodation would invite discrimination against atheists, agnostics and other freethinkers, severely impacting FFRF’s members and FFRF’s work to uphold freedom of conscience under the First Amendment.

Click here to read this and other FFRF news releases directly at FFRF’s website. Please help educate by spreading the word. 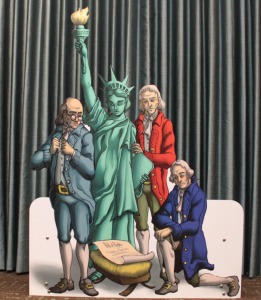 O say can you kneel? Free speech and football

Obviously, private employers aren’t the government. Private organizations can regulate the speech of employees and participants. This is bad news for those receiving tips at Cold Stone Creamery and has implications for the NFL players who choose not to stand during the national anthem. It’s also bad news for two students who were humiliatingly forced off their private, Christian football team, by their pastor coach for choosing to peacefully protest during the national anthem.

The government can regulate the conduct of its employees. In fact, the Constitution requires the government to regulate employee speech while they are on the clock—under the Establishment Clause government actors may not endorse religion while representing the government. Teachers in public schools don’t have a free speech right to preach to other people’s children because they are acting as government employees and bound by that clause.

But in most cases, the government cannot put speech demands on private citizens, including students in our public schools. The recent political push to force citizens to stand during the national anthem has bled into the public schools, where kids are beginning to emulate professional athletes and are becoming more politically aware as a result.

Piety and patriotism never mix well. Religion suffocates dissent, our Constitution enshrines it. Image via Shutterstock/Igor Stevanoic. Public schools, such as Parkway High School in Bossier Parish, La., are bound by the First Amendment’s Establishment and Free Speech Clauses. That means the school cannot punish a student for exercising his or her First Amendment rights, including the right to “take a knee” for the national anthem. (It’s nice to see the prayerful import of “take a knee” morph into something more secular and worthwhile.) If a school punishes such a student, it is violating the free speech clause of the U.S. Constitution. We’re looking at you, Parkway High.

The Supreme Court ruled more than 70 years ago in West Virginia State Board of Education v. Barnette that compelling a student to recite the pledge and salute the flag infringes upon a student’s First Amendment rights. The Barnette ruling was issued more than a decade before Congress divided “one nation, indivisible” by inserting “under God” into the then secular pledge. The court explained, in truly eloquent language, the limits on our government:

If there is any fixed star in our constitutional constellation, it is that no official, high or petty, can prescribe what shall be orthodox in politics, nationalism, religion, or other matters of opinion or force citizens to confess by word or act their faith therein.

Damn right. FFRF attorneys regularly quote this fine prose in our complaint letters. Those letters are often sent to protect nonreligious students who don’t want to stand for a pledge to one nation, under a god that they do not believe in.

The opposition to protests during the anthem will inevitably bleed into the public schools. This threatens nonreligious students who want to sit down for their rights and opt out of the pledge. If you or your child or a friend see this happen, please report it to FFRF legal using this web form. FFRF is here to protect the rights of these brave children.