Rubio uses the popular social media website, on which he has nearly three million followers, to communicate with constituents and keep them informed about his official duties as “US Senator for Florida,” as the account biography describes him.

“We have no issue with people reading and discussing the bible,” notes Seidel, “The road to atheism is littered with bibles that have been read cover to cover. But it is not for the government in our secular republic to promote one religious book over others or to promote religion over nonreligion. Doing so violates the Establishment Clause of the Constitution.”

In anticipation of Rubio claiming that this is his personal social media account, FFRF explains why that argument fails: “The private social media accounts of people who assume government office can become accounts that appear to speak for the government, unless these officers carefully distinguish their public and private roles. The @MarcoRubio account has not been scrupulous or thorough in this regard.” FFRF documents that @MarcoRubio is tied to Rubio’s identity as a government actor, and has almost exclusively been used to keep constituents informed of “Marco Rubio the Senator, not Marco Rubio the private citizen.”

FFRF’s letter lays out a compelling case, based on copious legal precedent, that government actors are not confined to making official statements only from one platform, and that Rubio’s personal Twitter account would be perceived by readers as primarily a platform to update Rubio’s senatorial duties.

The simplest solution “is to stop tweeting bible verses or any other religious message,” FFRF suggests. Either that, or Rubio can remove all traces of his public office from the @MarcoRubio Twitter account.

Adding a little religious authority to appeal to the good senator, FFRF concludes by suggestiong that Rubio might consider rereading Matthew 6:5-6, in which Jesus condemns public displays of piety.

FFRF, a national state/church watchdog, has more than 29,000 members nationwide, including more than 1,400 Florida members and a chapter, the Central Florida Freethought Community. 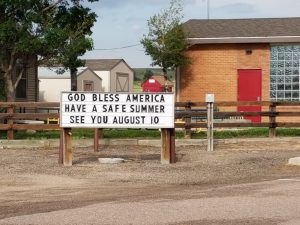 Religious displays are not permitted in public schools. Courts have continually held that school districts may not display religious messages in public schools, including crosses, the Ten Commandments, bible verses, bibles, religious figures, portraits of Jesus, etc. even if privately paid for.

Here is a link to the Top 10 School Violations.